PERFORMANCE – THE CONUNDRUM OF CONSISTENCY

In previous articles we’ve illustrated that if you invested in a fund that was performing exceptionally well, there was a high probability of poor performance in the periods that follow and that many of today’s outperformers were yesterday’s underperformers. The difficulty lies in choosing the right fund to invest in at the right time, something we believe comes down to mostly luck. At the recent Raging Bull Awards, the equity fund that received the award for best performance over three years to 31 December 2018 was the worst performing fund over 10 years and second worst performer over 5 years. This begs the question: How consistent are well-known fund managers in their performance? 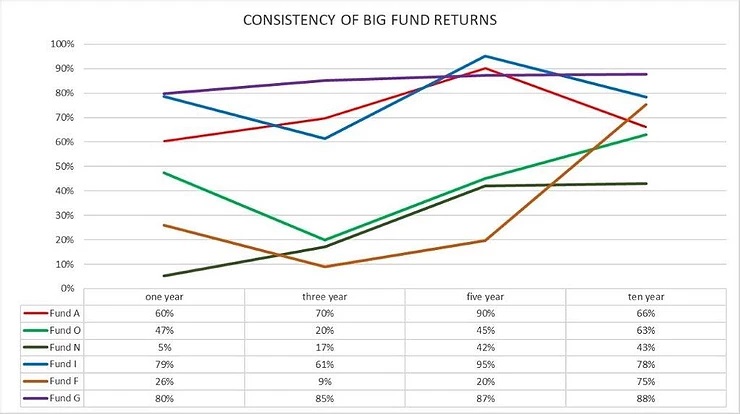 The graph illustrates that this is, in fact, not the case. Some funds consistently performed worse than competitors while others were simply inconsistent. However, for Gryphon, the most important point is how our index fund (named “Fund G”) was the most consistent fund by far, beating more than 80% of peers all of the time.